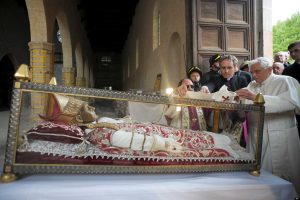 FILE – In this April 28, 2009 file photo provided then by the Vatican newspaper L’Osservatore Romano, Pope Benedict XVI stands by the salvaged remains of Pope Celestine V, in the 13th-century Santa Maria di Collemaggio Basilica, the symbol of the city of L’Aquila, whose roof partially caved in during the quake. Benedict XVI announced Monday, Feb. 11, 2013 that he would resign on Feb. 28 because he was simply too infirm to carry on – the first pontiff to do so in nearly 600 years. The decision sets the stage for a conclave to elect a new pope before the end of March. Pope Celestine V, the 13th-century hermit and saint, was one of the earlier popes to resign. (AP Photo/L’Osservatore Romano, file) 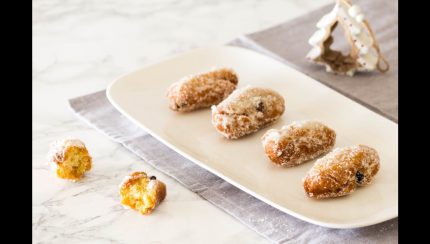